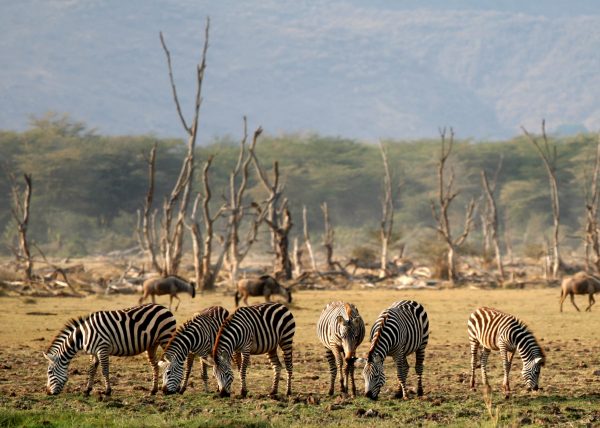 Tarangire National Park is the sixth largest national park in Tanzania, it is located in Manyara Region. The name of the park originates from the Tarangire River that crosses the park. The Tarangire River is the primary source of fresh water for wild animals in the Tarangire Ecosystem during the annual dry season

This Memorable Tanzania Safari begins and Ends in Arusha, it’s a wildlife safari tour that takes to the main four tourist attractions of Tanzania. These include Ngorongoro conservation Area and the Ngorongoro crater, Lake Manyara, Tarangire as well as Serengeti National parks. All these parks will offer you a safari experience of the northern Tanzanian circuit. Accommodation in Luxury Lodges on full Board. The tour will take you to Lake Manyara which is famous for the tree climbing lions. The tour will also take you to Serengeti national Park with the massive wilderness of over 14500 sqkm . The same safari will take you to Ngorongoro crater well known for highest concentration of game as well as a large population of carnivores and predators in Africa. This Tanzania tour will finally take you to Tarangire national park which has the greatest concentration of the game in Tanzania.

DAY 1: ARUSHA – MANYARA
The driver guide will come to pick you at your Arusha Hotel 8:30AM, proceed to Lake Manyara National Park for afternoon game drive. Dinner and overnight at lodge.

DAY 2: MANYARA – SERENGETI
After breakfast depart for Serengeti passing through Olduvai Gorge the archeological site of Leakey’s family. Serengeti offers arguably the most scintillating game-viewing in Africa: great herds of buffalo, smaller groups of elephant and giraffe, and thousands upon thousands of eland, topi, kongoni, impala and Grant’s gazelle. The spectacle of predator versus prey dominates Tanzania’s greatest park. Golden-maned lion prides feast on the abundance of plain grazers. Solitary leopards haunt the acacia trees lining the Seronera River, while a high density of cheetahs prowls the southeastern plains. Almost uniquely, all three African jackal species occur here, alongside the spotted hyena and a host of more elusive small predators, ranging from the insectivorous aardwolf to the beautiful several cat. Meals and overnight at lodge.

DAY 3: SERENGETI-SERENGETI
full day with morning and afternoon game drives to explore the plains. The Serengeti region encompasses the Serengeti National Park itself, the Ngorongoro Conservation Area, Maswa Game Reserve, the Loliondo, Grumeti and Ikorongo Controlled Areas and the Maasai Mara National Reserve in Kenya. Over 90,000 tourists visit the Park each year. Dinner and overnight at lodge.

DAY 4: SERENGETI – NGORONGORO
After breakfast depart for Ngorongoro, one of the natural wonders of the world. The jewel in Ngorongoro’s crown is a deep, volcanic crater, the largest un flooded and unbroken caldera in the world. About 20kms across, 600 meters deep and 300 sq kms in area, the Ngorongoro Crater is a breathtaking natural wonder. Meals and overnight at lodge.

DAY 05: NGORONGORO-NGORONGORO
After early morning breakfast, leave with picnic lunch for a full day crater tour, you will be taken 2000ft down the crater by a 4wheel drive vehicle. Explore the crater before ascending back to the lodge for dinner and overnight.

DAY 06: NGORONGORO – TARANGIRE
After breakfast in Serengeti drive to Tarangire. Afternoon game drive. Dinner and overnight at the lodge.

DAY 07: TARANGIRE – ARUSHA
Morning game viewing game drive in Tarangire National Park and after drive back to Arusha arriving late evening and drop to your hotel where the tour end.