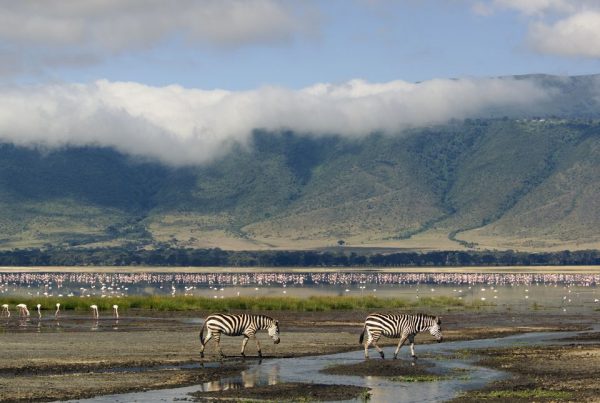 Maasai Mara National Reserve (also known as Maasai Mara, Masai Mara and by the local people as The Mara) is a large game reserve in Narok County, Kenya, contiguous with the Serengeti National Park in Mara Region, Tanzania. It is named in honor of the Maasai people (the ancestral inhabitants of the area) and their description of the area when looked at from afar: “Mara,” which is Maa (Maasai language) for “spotted,” an apt description for the circles of trees, scrub, savanna, and cloud shadows that mark the area.

Pick-up from your hotel in Nairobi and drive to ward south west Maasai Mara with a stop-over at the edge of the escarpment to marvel at the fall of The Great Rift Valley; a geological phenomena emanating from the Red Sea to Mozambique in southern part of Africa after further drive to Narok town for lunch. As you proceed driving to Maasai Mara National Reserve gate late Afternoon and check in to your accommodations welcome with hot beverage after leave for your evening game viewing. Dinner and overnight in a lodge or Luxury tented camp.

Whole day spent at the Masai Mara with game drives. Explore this vast tree studded reserve in search of lions, elephants, Giraffe, Cheetah, buffalo, Antelopes, Zebra etc. Wildlife in the Masai Mara is found in prolific numbers and the game reserve has highest wildlife concentration per square kilometer than any other park in africa.

Morning and afternoon game drives in this game reserve famous for annual wildebeests migration from the Serengeti in Tanzania in the month of July . Optional visits to a Masai Manyatta [village] can be arranged as can be game walks with resident Masai Morans at an extra cost. All meals and overnight in a l luxury camp.

Depart Maasai Mara for the lake Nakuru national park to arrive in time for lunch. Afternoon game drive around the lake and into the national park. The lake Nakuru hosts the world’s largest concentration of flamingoes which canopy the edge of these alkaline Rift valley lake. Pelicans and other bird species are abundant and the adjacent national park hosts lions, giraffe, warthog, leopard etc. There is a Rhino sanctuary in this park so Rhino sighting is almost guaranteed. All meals and overnight in a lodge.

Depart Nakuru after breakfast. Proceed to Samburu game reserve on the fringes of the semi-arid northern frontier district of Kenya. Picnic lunch will be hosted at the Thomson falls. The scenic Nakuru – Nyahururu road passes through the hub of Kenya’s food basket and an insight of the living situation of the local population is visible. Arrive Samburu in the late afternoon .Game viewing en-route to your lodge for check-in ,dinner and overnight in a lodge or luxury camp.

Whole day spent in Samburu game reserve. The arid conditions have provided habitat for distinct animal survival peculiarities. We find the reticulated Giraffe ,the Grevy’s zebra, the Gerenuk, Somali ostrich, lion, elephants, cheetah, buffalo and crocodiles at the Ewaso Nyiro river which is the lifeline of the Samburu game reserve. Other species of game are also found. All meal and overnight in the luxury camp.

Early morning game drive and later to the lodge for breakfast. An optional game drive before the return journey to Nairobi with lunch scheduled at the base of Mt. Kenya. After lunch take a leisurely drive admiring tea, coffee and pineapple plantations to arrive Nairobi in the late evening. Drop-off at your hotel where the tour end.