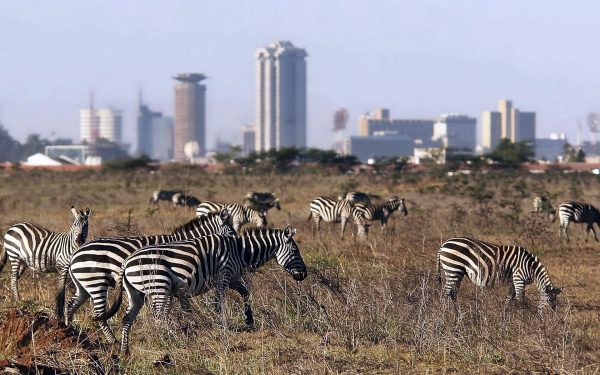 Nairobi National Park is a national park in Kenya. Established in 1946, the national park was Kenya’s first. It is located approximately 7 kilometres south of the centre of Nairobi, Kenya’s capital city, with an electric fence separating the park’s wildlife from the metropolis.(Wikipedia)

Only within half and hour’s drive of the city centre, the Nairobi National Park provides a fascinating glimpse of Kenya’s wildlife heritage at the backdrop of the city’s skyline. The park is bordered on one side by the city, the other side is open allowing animals to move freely in and out the park. Nairobi National Park Kenya’s first ever National park is a unique and unspoilt wildlife haven within sight of the city’s skyline. Rhino, buffalo, cheetah, zebra, giraffe, lion and plenty of antelopes and gazelles can be seen roaming in this open plains country with a section of highland forest as well as stretches of broken bush country, deep, rocky valleys and gorges with scrub and long grass. Ornithologists catch with over 300 bird species including the Secretary bird, crowned cranes, vultures, peckers and many more. Tour available daily at 0700hrs and at 1500hrs. Price Guide: US$ 125 Per Person